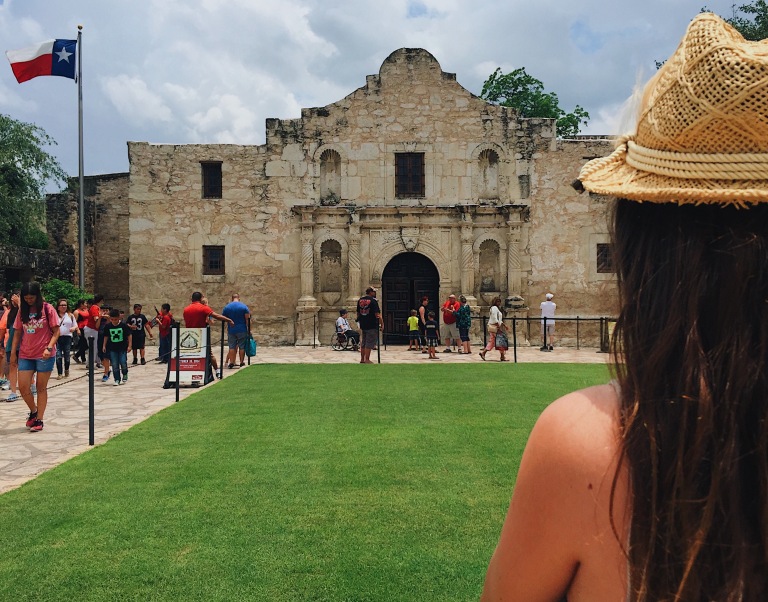 When we arrived in San Antonio, Texas on May 19, 2015, I was on my first cross-country road trip. We only had about 48 hours to spend in this intensely hot but incredible city. The temperature was wavering between 102 and 104 degrees Fahrenheit but that didn’t stop us from seeing all of the incredible things that this San Antonio has to offer.

In this City Spotlight, I’ll show you some of the best things to see and do when you have a few days (or even a few hours) to spend in San Antonio, Texas. Let’s get started!

Our first stop was at one of the, if not the, most historical parts of the City of Saint Anthony – the Alamo. The fortress now known for its significant role in the Battle of the Alamo was built in 1718 right in the middle of a cottonwood grove.

Its original purpose was to serve as a Roman Catholic Franciscan mission, but it was later abandoned by this group and re-occupied by Spanish troops sometime in the early 1800s. We have these Spanish troops to thank for the Alamo’s namesake — “alamo” is Spanish for cottonwood.

The actual Battle of the Alamo didn’t begin until February 23, 1836 and only lasted for 13 days. The purpose of the battle was for the American rebels to win Texan independence from Mexico. But because it was roughly 180 American rebels against about 4000 Mexican soldiers, it’s not completely unbelievable that the American troops didn’t do so hot.

However, this battle was important because it acted as a distraction to give General Sam Houston time to build up his army San Jacinto. The soldiers stationed here were inspired by the bravery of the rebels at the Alamo and used this inspiration as fuel to defeat Santa Anna’s army and win Texan independence on April 21, 1836.

One last neat tidbit about the Alamo… Within the walls of the memorial site is a large tree that is nearly 150 years old. This tree caught my eye on the way out because I’d always pictured myself getting married under a huge tree just like this one. I only found out later the interesting history behind this crazy big tree.

You might be thinking, “WOW, the things this tree must’ve seen during the Battle of the Alamo!” Turns out, this tree is the first tree to ever be transplanted successfully. By transplanted, I mean taken out of the ground in one place without disturbing the roots and replanted somewhere else where it continues to live and thrive.

Take a Boat Ride at the River Walk

After our enlightening trip through the Alamo, we hit the River Walk, one of San Antonio’s most popular social gathering spots, for some margaritas and authentic Mexican food.

If you only have a few hours in San Antonio and needed something to do, I wouldn’t hesitate for one second to suggest the River Walk. In its most basic form, the San Antonio River Walk is a network of water channels a story below the streets of San Antonio. But it’s so much more than that with lines of shops, bars, restaurants, and public art installations.

The establishment of the River Walk was actually not intentional — unfortunately, a bunch of old dudes in the early 1900s did no sit down and say “a river but with authentic Mexican food and alcohol” even though that what I tell myself happened. At first, the waterways were installed as a way to vacate excess water from the city when it was hit with a devastating flood in 1921.

While you’re there, you can simply walk the shops and see the art. Or, you can take a boat tour through the River Walk water channels, which are about 2.5 miles in length if you strung them all together. Each boat tour comes complete with a knowledgeable and quirky tour guide that will give you all the deets of the River Walk’s many annual happenings and a lengthier history on its creation.

After your boat ride, side down at one of the many authentic Mexican restaurants along the River Walk and have some queso, a few tacos, and a refreshing margarita. Drink with more caution than normal, though — there are no railings between the waterways and the sidewalks you’ll stumble along after exiting the bar. On average, at least one person stumbles right into the river a day.

Once we had our fill of queso and freshly made tortilla chips at the River Walk, we took a leisurely (and sweaty) stroll over to Market Square to do some more shopping. In spite of the heat, the walk over wasn’t bad at all — it’s less than a mile between the two.

Market Square, or El Mercado, is a festive and eloquently decorated outdoor mall featuring over 100 shops owned by San Antonio locals. This area is famously known as the largest Mexican market outside of Mexico.

While all of Market Square spans only about three blocks, there’s a lot to see and do here. Soak up the vibrant Mexican culture by touring the many specialty shops where you’ll find anything from authentic Talavera pottery to handcrafted paper art to homemade salsas and unique hot sauces.

On top of all the specialty shops that El Mercado has to offer, it also features a Farmer’s Market Plaza where you can find fresh produce and snacks to munch on. Or, check out one of the many full-service restaurants like Mi Tierra Cafe Y Panaderia and La Margarita Mexican Restaurant & Oyster Bar. Both of which have killer happy hours for those who are of age.

Chow Down on Some Southern BBQ

After our (very hot) day in San Antonio, we crammed back in the car to head further west on our cross-country road trip. But we knew we would be doing Texas a serious injustice if we left the state without eating some barbecue. So, we made a pit stop at Rudy’s Bar-B-Q.

Rudy’s Bar-B-Q was originally established as an all-in-one gas station, garage, and grocery store in the 1800s by Rudolph Aue. Bar-B-Q was added into the mix in 1989 which launched a state-wide frenzy for this tasty in-house smoked meats and homemade sides.

What cracks me up about this place is that you don’t just order a sandwich and a side of coleslaw – you order meat and sides by the quarter pound and bread by the loaf. Then, it’s all plopped down in the milk carton carrier for you to mix and match for yourself. Granted, the whole experience was a bit messy but it was the best damn barbecue I’ve ever had.

Not only is the food good, but so are the prices. So, if you’re looking for something quick, hearty, and relatively cheap, take a little road trip to Rudy’s in Leon Springs, just north of San Antonio.