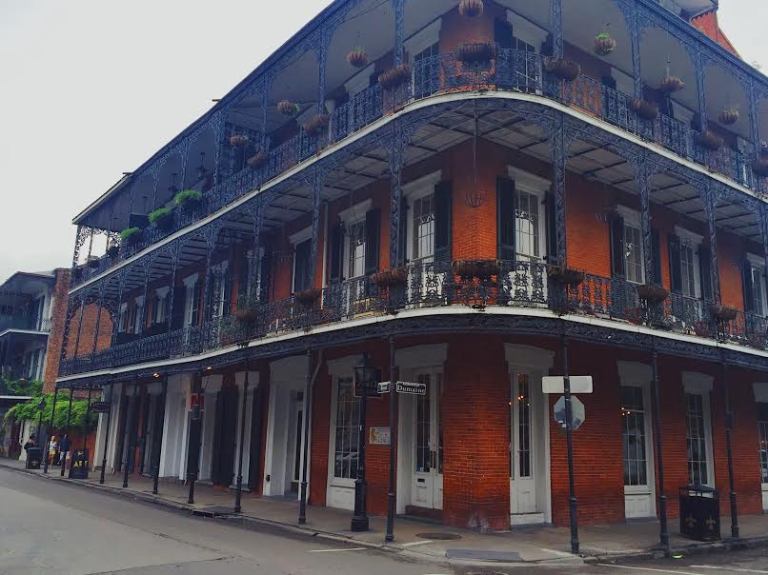 Ah, NOLA. One of the most popular and highly anticipated travel destinations on the planet. While it’s known far and wide as a partier’s paradise, there’s much more to this historic city than just the constant raging that can be found on Bourbon Street. Check out this City Spotlight to learn more about what lies in wait for you in New Orleans, Louisiana!

DISCLAIMER: Graphic content ahead. There is detailed mention of horrendous mistreatment of humans and death that can be very hard to stomach. Please proceed with caution.

We started our day in New Orleans (early) at Café Du Monde, known in French as “The People’s Cafe”. Though it may just look like your regular old open-air coffee shop from the outside, this couldn’t be more wrong.

The traditional café au lait and beignets served at Café Du Monde are as old as the French Quarter itself. In the early 1700s, when the French came over to settle the land now known as New Orleans, they brought coffee which they mixed with chicory during a coffee shortage during the American Civil War. The chicory added a hint of chocolate to the flavor, and it just kind of stuck. This concoction is still served today as, you guessed it, café au lait.

They also brought beignets which are… let me put it this way: if you went out and bought the fluffiest, tastiest donut in the world, plugged the hole and then topped with half an inch of powdered sugar, you’d have yourself something almost as good as a beignet.

After breakfast, we perused the French Quarter on our own. We stopped by the Cathedral-Basilica of Saint Louis, King of France, which is the oldest cathedral in the United States. The original church on this site was established in 1718 but has had many renovations due to weather damage, the need for expansion, and even a bombing that occurred in 1909. However, the cathedral itself is far less interesting than its cemetery, which houses the remains of many renowned past residents of NOLA. Among these residents is Voodoo priestess Marie Laveau. Sound familiar?

If you’ve seen American Horror Story: Coven, it should. In this season, Laveau simultaneously works as a hairdresser and a Voodoo queen. This isn’t completely inaccurate as local folklore claims the real Marie Laveau worked as a hairdresser for members of the higher class in order to gain advantageous information.

One more fun fact about the St. Louis Cathedral burial grounds: actor Nicolas Cage has an empty tomb waiting for him there to serve as his final resting place. I know that might make you chuckle but there’s actually quite a story behind it that wouldn’t become apparent until our afternoon haunted house walking tour.

Along with several other mansions and even a haunted bar, our walking tour took us to the infamous LaLaurie mansion, which was home to Delphine LaLaurie, better known as Madame LaLaurie. The two-story mansion was one of the biggest estates in town and came equipped with an attached slave quarters. For all of you Coven fanatics out there, this should be ringing some bells as well. The mansion was occupied by this seemingly regular high class woman, her husband, and their two daughters from 1832 to 1834.

It wasn’t discovered until rescuers responded to a fire in the kitchen of the mansion on April 10, 1834 that the world would know just how blatantly un-regular the LaLaurie household really was.  They found a seventy-year-old slave chained to the stove that had caught fire; she survived and explained that it was a suicide attempt to avoid being taken upstairs where LaLaurie’s slaves went to receive punishment but never returned.

An angry mob came after LaLaurie in the wake of reveal of her fowl mistreating ways but she fled to France before they got to her. However, it’s said that she died many years later in a well-deserved boar-hunting accident.

Many years down the line, the mansion was purchased by none other than Nicolas Cage who began the move-in process at Halloween. He knew nothing of the home’s insidious history until he noticed a mob of people gathering outside that Halloween night as they did every year. It was then that one of his assistants informed him of the horror that occurred behind the mansion’s walls. He sold the house the next day and moved out without having ever slept there.

After this horribly gruesome but insanely fascinating recount of what really went on in the LaLaurie mansion almost 200 years ago, we shook it off with a few drinks at Pat O’Brien’s. Pat O’Brien’s is known, first and foremost, for their unfortunately named Hurricane cocktail, which consists of fruit juice, grenadine, and absurd amount of rum.

Said cocktail is said to have originated at this bar beginning in the 1940s. The history of the cocktail is more about a fluke rather than a stroke of genius on the bartender’s part. World War II caused something of a mess for the importation of scotch so bar owners were forced to purchase upwards of 50 cases of rum in order to get their hands on a singular case of scotch.

Pat O’Brien’s is also known for being the birthplace of dueling pianos. Two pianists on two separate grand pianos take turns taking song requests from the audience while making jokes and generally just trying to get everyone drunk and riled up. It was a good time but all I have to say is that those Hurricanes are not for the faint of heart.

Thankfully, we had Brennan’s brunch the next morning to counteract the mild hangover I had after one singular Hurricane. For more than 70 years, this elegantly old fashion restaurant has been serving up a menu with methodically mixed Creole, French, and Spanish flavors.

We stopped by Brennan’s on our way out of town and we did it as big as you can with Seafood Filé Gumbo, Artisanal Eggs Benedict, and, of course, Bananas Foster. You see, this fruity delicacy was actually invented here at Brennan’s in the 1950s when Brennan’s executive chef at the time concocted the recipe in order to make Brennan’s stand out. And stand out it did. Plus, as an added bonus, they make your Bananas Foster right in front of you at your table making for an extra memorable experience.